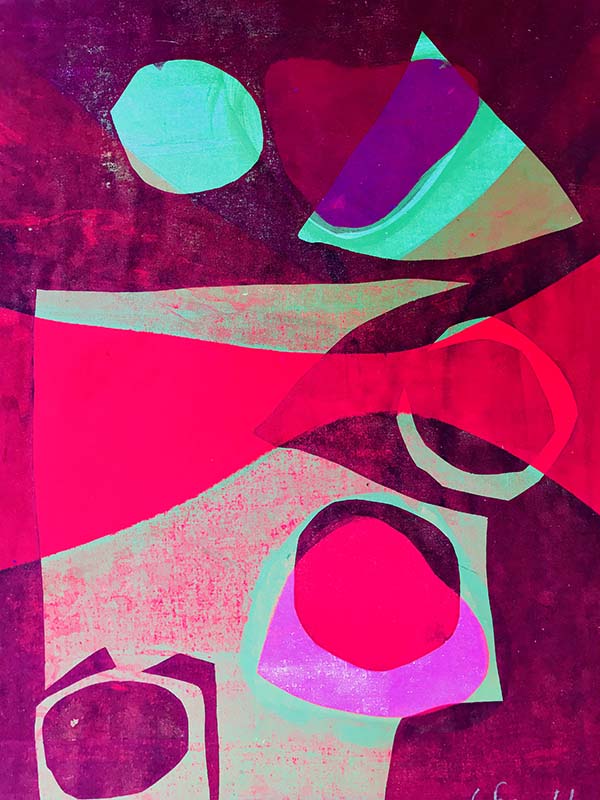 by Stuart Husband, journalist and author

“Good art can always enliven a space,” says Geraldine Franklin. “But the best art can change the temperature in a room”

Franklin’s oil paintings, screenprints and ceramics can certainly give the mercury pause for thought. Her hot colours – inspired equally by the brio of Matisse and the saturated hues of Patrick Heron and the St Ives school – combine with a coolly appraising eye that sees her shift easily between figuration and abstraction, flatness and depth, and larger and smaller scales.

“I’ve got something contrary in me, where I want to try out oppositions in the same work,” she says. “I was quite inhibited as a child, so when I discovered this world of play and terrific freedom, I didn’t want anything else in my life. My thing is just to let go a little, see where the work takes me, and not to be too safe and controlled.”

Franklin earned a first-class honours degree in art and design from North Staffordshire Polytechnic in Stoke-on-Trent, but it was the decades she spent teaching art psychotherapy – initially at Goldsmiths in London, and subsequently in schools, hospitals, and prisons – that had a profound impact on her own work. “It was intuitive, untutored stuff, pure expression really,” she says. “It reminded me of that Picasso quote about how he was able to paint like Raphael in four years but how it took him a lifetime to be able to paint like a child. I lost interest in the more obviously formal, schooled, polite way of doing things. I admire people like Rose Wylie and Roger Hilton, whose work has a very spontaneous, childlike quality.”

Franklin’s own diverse body of work is animated by a similarly skittish sensibility, whether it’s a jewel-like study of a winter landscape or a big, bold acrylic of a set of stacking chairs (she relishes the challenge of working on a grand scale: “I don’t like small, piddly, twee stuff,” she says. “A larger format encourages more risk-taking; the stakes are higher.”)

If there are themes running through the work, she says, one of them would be windows: “Both literally, as I like to paint apertures that look out onto another world, and figuratively, as I think everything that’s going on in your life is reflected in your work, which is terrifically powerful and interesting.” Another might be process: “In my paintings and screenprints I’m interested in layering, scumbling and tearing, so the motif I started with – a bottle or bicycle or whatever it is – might be transformed, or even vanish altogether, as I go.”

In the end, she says, the work’s appeal – and its thermometer-challenging qualities – rests not only on its vividness, audacity, or hard-won wisdom: “It’s also that I’ve made myself very vulnerable, and put my deepest feelings on display. That’s what people respond to.” And, echoing Picasso, she says there’s always more to unlearn. “With every piece I embark on, I always feel like I’m starting from scratch. Here we go again, on the high-wire act,” she laughs. “But I wouldn’t have it any other way.”

“It is to have the right intention, the right action and the right effort. Mindfulness helps with greater clarity on what is happening with the media, how it is manipulated, the speed of the brush, the over laying, the size, the balance of the composition, the space or the intensity of the area being addressed.

All these thoughts are taken into consideration during the production. It is not easy. The inner reflection is used to gain a deeper understanding of the art which unfurls itself before me. The critic is waiting to attack, to throw me off my journey, I have to resist this negativity.

It is a good idea to work on more than one piece at a time, and to have a long gap between looking at pieces that have come to a halt. I must not be constrained by the picture “working” or not “working” visually. Sometimes it is just like magic when a piece comes together as though “the muse” is working through me. I may be unconvinced by a process, and then before my eyes is revealed art which I would never have thought of producing, and yet here it is. This surprise, or ‘ah ha’ moment, makes the intensity of the process so worthwhile. I continue to strive for the intangible, not resting until I discover what I am trying to communicate.”

Geraldine achieved a First Class honours degree (BA) in Art from North Staffordshire University in 1980, after which she went to Goldsmiths’ College and studied Art Therapy.

Having worked as a private practitioner individually and in groups for thirty years, Geraldine is currently working in her studio in Bexhill.

“I am first and foremost an Artist. I have worked from my studio in London and currently Bexhill for thirty years and have exhibited in solo and joint shows. I have been a member of Greenwich Open Studios, and currently SoCo, East Sussex,  recently participating in Coastal Currents.

I have shown in the Oxo tower with Skylark Artists, and at Affordable Art Fairs and have set up Pop up shows with other Artists and invited other artists to get involved with promotion of our work. I have offered art workshops with Deptford X, and in Deptford Does Art, and set up an Art space in Deptford London, as well as numerous venues around London.

I am passionate about encouraging people to express their creativity from whatever age, as an Artist and as an Art Therapist. I teach English (TEFL), to all ages, part time.”

There are no reviews yet.

Only logged in customers who have purchased this product may leave a review.